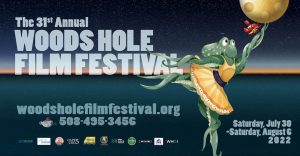 The Woods Hole Film Festival celebrates its 31st year of bringing the best in independent film from around the world to Cape Cod. The festival dates are Saturday, July 30 through Saturday, August 6. The film program includes 116 films selected from submissions from around the world: 17 feature narratives, 27 feature documentaries, and 72 ...
END_OF_DOCUMENT_TOKEN_TO_BE_REPLACED