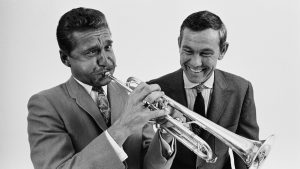 The Woods Hole Film Festival season series WHFF Virtual presents the documentary NEVER TOO LATE: THE DOC SEVERINSEN STORY, including an online Q&A with Doc Severinsen himself, along with the filmmakers on Saturday, February 27 at 7pm EST. ABOUT THE FILM: After three decades as the colorful bandleader to The Tonight Show Starring Johnny Carson, ...
END_OF_DOCUMENT_TOKEN_TO_BE_REPLACED