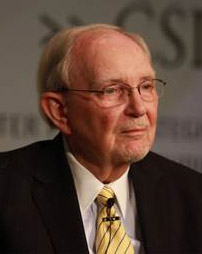 The Falmouth Forum series hits the airwaves this fall in collaboration with WCAI, the Cape, Coast, and Islands NPR station. Forum speakers will join host Mindy Todd on “The Point” at 9:00 AM on the first Thursday of each month for discussion and listener Q&A. Tune in to WCAI 90.1, WNAN 91.1, WZAI 94.3 or online at capeandislands.org.

After graduating from Syracuse University’s Maxwell Graduate School in 1962, James Purcell was appointed as a Kennedy Administration management intern and served the next fifteen years in the Atomic Energy Commission, the Agency for International Development, and the Bureau of the Budget/Office of Management and Budget.

In 1977, he moved to the State Department, where the deputy secretary of state asked him to oversee the creation of a new rescue organization for Vietnam War refugees in 1979. As “acting” and then “permanent” director of the new bureau for refugee programs (RP) from 1979 to 1987, Mr. Purcell directed his team’s implementation of initiatives passed by Congress in the Refugee Act of 1980, including consultations with state and local governments and other partners. Many of the original implementation measures were maintained and further refined by successor administrations. More than 1.1 refugees were resettled in the United States during his administration and many millions more (up to 10 million annually) were aided overseas.

Mr. Purcell was subsequently elected to two five-year terms as director general of the Geneva-based International Organization for Migration, serving from 1988 to 1998.

He is presently board chair for USA for IOM, a U.S. private sector advocacy and fund-raising organization. His book We’re in Danger! Who Will Help Us? Refugees and Migrants: A Test of Civilization was published in 2019.